skip to main | skip to sidebar

The United States is a place of tradition; no one can argue against that. Tradition is only the illusion of permanency. People take these ideas, images, songs, etc., and hold them close to their hearts. But what if a tradition is offensive? Does the majority have to stop enjoying a tradition because of the will of the minority? These are all questions that pertain to an argument that has been raging for the better part of a century: are Native American mascots acceptable, or outdated and racist?
The history of this subject really begins with the colonization of the Americas. It was common (and still isn’t uncommon) for kids to play “cowboys & Indians” and re-enact popularized misinterpretations of Native American customs. Later on and into the 20th century, sports teams dubbed themselves with Native American monikers because of the widely acceptable image of natives as warriors, savages, or simply insane and uncivilized people. Of course, in any public or social setting, these qualities are unacceptable. However, when applied to a sports team, violence and barbarity can be positive and pleasing with fans and anyone who wants to jump on the bandwagon.

A good local example would be the University of Idaho Vandals. Clearly, this mascot is not meant to be a Native American. He is undeniably a brute, however. The Idaho Vandal is a large, bearded Viking-type man. Vikings can be associated with looting, rape, and destruction of innocent people. But in the context of sports, these negative connotations are ignored and fans simply enjoy being the fiercer, rowdier team amongst other more tame mascots.
The Vandals are not the issue here, though. Native Americans have been speaking out over the last several decades to end the humiliation of their culture through sports. This began in the 1960s with the Civil Rights Movement. The National Congress of American Indians began a push for the elimination of negative stereotypes of Native Americans in cartoons, movies, and sports teams. Surprisingly, cartoons and movies did not pose too much of a problem or a threat; it was generally agreed that many cartoons (especially those of the WWII era) were inherently racist. However, people seemed to take sports teams a little more personally.
One of the main contenders in this movement is the Washington Redskins, who still refuse to change their mascot. Although the logo itself (see below) isn’t blatantly offensive, there are other issues. Mainly there is a problem with sports fans. Opposing and rival teams find no problem in yelling things such as “Kill the Redskins!” or “Kill the Indians!” Many white fans don’t find this offensive, but I believe everyone can agree that the situation would be different if the mascot were a grossly exaggerated black male and fans were calling for him to be killed. 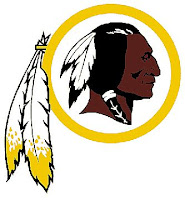 I believe this is an issue having to deal with the deep seated social barriers that Native Americans face. In my other blog posts, I’ve written about how Natives are ignored, pushed to the side, and generally not cared for by the federal government. They are the least vocal and least visible of all the minorities, and are treated poorly almost nation-wide. Like I wrote before, if a sports team had a mascot that was a man in black face and dancing around circa 1910, there would be serious problems in the media. If a sports team had an Asian man with a rice paddy hat and railroad tools circa 1850, there would also be problems. If a sports team had a “white trash” man wearing a tank top and beating his wife or smoking methamphetamine as a mascot, the local residents would undoubtedly be offended. Contrarily, a “redskin” wearing culturally inaccurate head dresses and smoking a peace pipe causes few issues. Why?

Studies by many different independent sources have shown that the overwhelming majority of Native Americans do not find these images and mascots offensive, or at least are apathetic about how they feel. This has been used as a defensive by the Washington Redskins in recent history; but is it really an excuse? I feel like this issue and argument can be closely related to that of the accepted standards of sexual harassment. In just about any modern workplace where sexual harassment is completely unacceptable, the rule is that if any one person finds anything offensive, be it verbal, visual or somatic, then it is an issue. For instance, if a man makes a “blonde joke” in the office where every single person doesn’t mind with the exception of one person, then he can be reprimanded. Some may argue that this issue is completely irrelevant to that of Native American mascots, but I disagree.
If there are any Native Americans who feel debased and humiliated by the extremely public mascots that imitate their culture and heritage, then the issue needs to be resolved. Studies have shown that Native Americans do feel humiliated by the public portrayals of their culture and that this can lower their self esteem, self image, and pride in their heritage. So is it any wonder that the majority claimed to not be affected by the imagery of Native American mascots and rowdy sports fans doing drunken imitations? I propose that the results of these surveys are proof that the routine humiliation and degradation of Native Americans is one of the last completely socially acceptable forms of racism left in the United States. This structural racism is so deep that it has convinced even the victim race itself that it is okay to embarrass Native American culture and history. Images have an extremely powerful effect on people and their views, and the routine exploitation of natives as a savage race of people has helped keep their nations subdued and in poverty across the United States.
There are many counter arguments to everything I have just proposed. It is easy for Caucasians to brush these problems off of their shoulders and suggest the Native Americans get a sense of humor or just learn to “deal with it.” Most opponents of mascot change will claim that this is an attack of “political correctness,” and that anything social is being moved liberally to the left in order to make everything vanilla, PC, and peachy. This may seem like a valid argument until it is analyzed carefully. Not many people would dare say the same thing about racism towards blacks or Hispanics. It is simply okay to make this claim against a “lesser” form of racism because of how acceptable it is to be racist towards a seldom-defended group. On the other hand, why is political correctness such a negative term? And why do people want to defend their freedom to be racist? People cling onto these traditions as if when their freedom to be racist is dried up and gone, they will have no freedom at all. This is because racism is a tradition just like Halloween or the 4th of July.
What about the Notre dame Fighting Irish? They might as well rename their team to the “drunk and belligerent micks,” or the “Catholic alcoholics.” If we get rid of Native American mascots, won’t we have to get rid of this tradition as well?
I don’t believe we do. Like I mentioned before with the sexual harassment argument, an act is offensive as long as someone claims it as offensive. If one person has their feelings or self esteem hurt by a joke, then whatever the joke is should be considered for appropriateness. The Fighting Irish, however, are poking fun at themselves. Most Americans of Irish descent celebrate their rowdiness, and I believe you’d be hard-pressed to find a Notre dame fan who is offended by their team mascot or imagery.
There is an even better example in Florida. The Florida State Seminoles teams are an interesting change from previous examples like the Washington Redskins. This is mostly because the Seminoles are the only team to be officially endorsed by a Native American nation; in this case, the two remaining Seminole tribes. Florida State University worked with the Seminoles to create an honorable interpretation of their tribe that was practically universally approved of. However, there can still be problems with rowdy fans.
One of the largest complaints voiced by Native Americans is not with college sports teams, but with younger children. As of 2006, there were over 2,500 teams from elementary, middle, and high schools that imitated Native Americans in some way. If these children aren’t properly educated about Native Americans and their team mascots, it can only continue the generational racism that is so prevalent in the United States.
But why should we care? As a middle class Caucasian male, I clearly have nothing to worry about with this issue. However, I find it insulting to separate racism and declare some of it acceptable and some of it not. Exploiting the culture of Native Americans against their will for the entertainment of sports fans is not justified in any way, shape, or form. By accepting these images as silly, playful, or unimportant, we are downplaying the history and heritage of an entire race of people who we (as a nation) have already unseated and treated as refugees over the last couple centuries. In order to legally be able to use a Native American image as a mascot, the sports team should need to get explicit permission from the tribe they are borrowing the culture from, such as in the case of Florida State University. If we don’t discontinue the acceptable racism against Native Americans, then they will never be able to prosper and fully integrate themselves into American society.

There is a documentary on this subject made last year. Here is a trailer that includes some interviews with Native American activists.


Click HERE to open the feedback tool.
Posted by Joseph at 6:19 PM